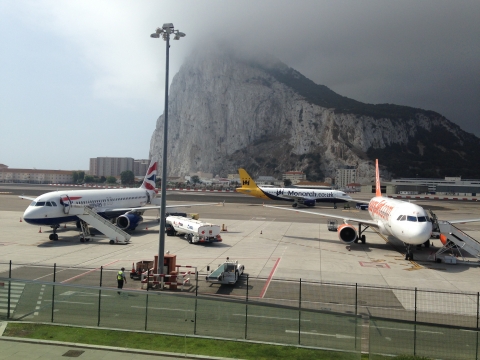 Gibraltar International Airport is expected to process a record number of passengers this forthcoming Summer 2016 season.

The season, which officially commenced on Sunday 27 March, will this year also see additional passengers travelling through the airport with new routes and frequency increases.  British Airways will offer an additional 4 services to London Heathrow per week, increasing the total on offer to 13.  Easyjet will provide an additional 2 services to London Gatwick in the peak summer months, offering 13 services per week, double daily expect on Saturdays.  Services to Bristol, which started in April 2015, will operate three times a week on Tuesdays, Thursdays and Sundays, but a larger A320 aircraft will operate on Sundays, meaning an additional 48 seats per week on offer.  easyJet will also launch a new twice weekly service to Manchester on 3rd July, flying on Wednesdays and Sundays.  Monarch Airlines will increase the number of weekly services on offer to Birmingham from 3 to 4, and will also launch a new four times weekly service to London Gatwick as from 1st May, increasing their number of destinations available from Gibraltar from three to four, joining London Luton, Manchester and Birmingham.

The main highlights for the season include:

Four new early morning departures from London Heathrow on Mondays and Fridays as from 28th March, and Tuesdays and Thursdays as from 3rd May.

Two additional weekly flights to London Gatwick on Tuesdays and Thursday evenings as from 19th July.

An additional service from Birmingham, rising from three to four, with day changes, now flying on Mondays, Wednesdays, Fridays as Sundays instead of Tuesdays, Thursdays and Sundays.

Overall, Gibraltar International Airport will handle an additional 13 flights per week in the peak summer months, to bring the total of weekly services to 50, up from 37 in Summer 2015.  Passenger numbers are expected to continue to rise again.

The full weekly schedule for July, August and September is as follows:

Commenting on the launch of the Summer Schedule, the Hon Samantha Sacramento MP, Minister for Tourism said ‘I am delighted that the airport will enjoy such a busy summer, bringing even more visitors to the Rock.  It is very encouraging to see our partner airlines placing their confidence in Gibraltar and increasing capacity substantially. Not only to core destinations, but also to regional departure points.  The teams at the Gibraltar Tourist Board and Gibraltar International Airport continue to work hard to ensure that further growth continues and that passengers receive high standards of care.  Her Majesty’s Government of Gibraltar continues to develop its policy of sustained growth’.