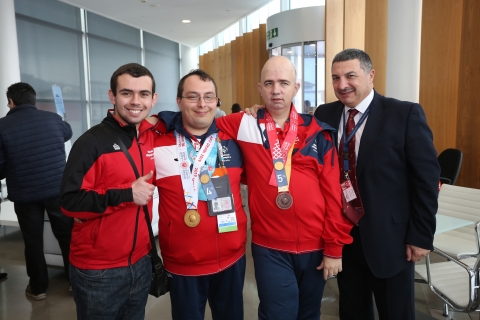 The Chief Minister, Fabian Picardo together with Ministers Samantha Sacramento and Stephen Linares, who had both also travelled to Abu Dhabi to visit them during the Games, were present to welcome them on their arrival on the airport tarmac.

The Ministers then joined parents, friends and supporters in the airport's Wessex Lounge for a fitting welcome.

The Air Terminal staff were also especially pleased to see the return of two of the athletes, Malcolm Miel and Douglas Pitaluga, who had achieved medals in swimming and boccé.

Malcolm and Douglas both work in the Terminal as part of HMGoG’s Sheltered Employment Scheme and can be seen in the photograph, together with their work colleague Sam Hook, who is a Special Olympic athlete in his own right as a member of their very successful football team.   Also in the photo is Terence Lopez, the Air Terminal Director, who was also present to greet the entire team on their celebratory arrival.