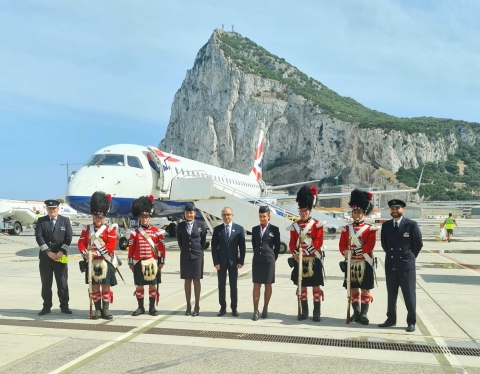 The new service is operating twice weekly until the end of September on Fridays and Mondays and flown with Embraer E190 aircraft.

The Hon Vijay Daryanani MP, Minister for Business, Tourism, Transport and the Port, was at the airport to welcome the flight, along with teams from Gibraltar International Airport and the Gibraltar Tourist Board. Arriving passengers were presented with Visit Gibraltar branded gifts.

Minister Daryanani said: “This is the fourth new air service to Gibraltar and the third new airline that I am welcoming to Gibraltar International Airport in the last seven months. Not only am I delighted to welcome BA CityFlyer to Gibraltar but also we are encouraged to see the airline starting their service earlier than planned. This shows their commitment to the destination. In addition, Gibraltar International Airport now has services to four London airports, as we open up Gibraltar to another catchment area. This Government’s record on expanding air services is now outstanding and is there for all to see. Although this service is seasonal, I look forward to working with the airline to explore further opportunities.”